The Adult Bully is my Upstairs Neighbor

I have a personal story to share today. I’ve been contemplating whether or not I should post about this but I’ve come to the conclusion that although I don’t post about really personal things too often, it’s totally ok when I do.

I live in a house that is divided into two different living spaces, the upstairs and downstairs. I occupy the downstairs while a couple occupies the upstairs.

The owners of the house are the man upstairs and my boyfriend. They purchased the house for themselves and both of them had some life changes and got back together with their partners (myself and the woman upstairs).

Here’s where it gets interesting…

The laundry room is downstairs.

My boyfriend is away for a while and will be for another few months.

While he was here there were no problems. He is a strong personality.

Shortly after he was gone I started noticing that the women upstairs wasn’t being as respectful as to when she was doing her laundry. She’d do it early when I was trying to sleep or whenever she felt like it. She became a bully.

Here’s the best part, she has never once knocked or called down the stairs to see if she could come through. Nope, she just barges through whenever with no warning.

The adult bully also has a habit of huffing, puffing, and spewing out obscenities to herself while in the laundry room. Life is so frustrating isn’t it? Then *slam*! The laundry room door shuts. Oh, she must be done in there and going back upstairs now.

I’ve had company over who will witness her walking through like she owns the place and look at me with a screwy face asking who she is. I just say she lives upstairs and is above knocking.

Why don’t I put a lock on the door you ask….well, I did. She then busted down the door.

The lock I use when I leave the house she has a key to, so that’s not a problem. The lock I put on to use when I’m home to lock from the inside is the one she spazzed out over. She literally busted through the door.

This was a lock for me to use only when I’m home for some  privacy.

She wasn’t having it. Her boyfriend was no help, he’s aware of her behavior but doesn’t stand up to her much I assume because it’s easier for him not to deal with her temper tantrums.

Not only did she bust the door but she started yelling and screaming at me whenever she came down and told me I wasn’t allowed to do laundry anymore and insulted me about things that have nothing to do with any of it.

I told her she was crazy and she reacted by seeming to be proud of it. Told me yes, she is and I had better get used to it.

By the way, this isn’t a young adult bully I’m referring to. This is a grown women in her 40’s.

Besides the yelling, which indeed, I did reciprocate. I have never had a problem stepping up to defend myself when someone verbally attacks me. She started to slam things on the floor upstairs above my bedroom. She was going out of her way to be a bully. She’d run the water every time I showered and even put a lock on the laundry room door.

The lock on the laundry room door didn’t bother me because after her busting my door in I wasn’t hesitant to rip the crappy door frame off if I had to. It didn’t come to that, the lock was cheap and way too easy to open with a knife.

As terrible as it is I was playing her game. To let her know that her attempt of locking me out of the laundry room didn’t work I left a pile of clean laundry folded on the dryer so she’d notice it next time she went in there.

See picture for her reaction… 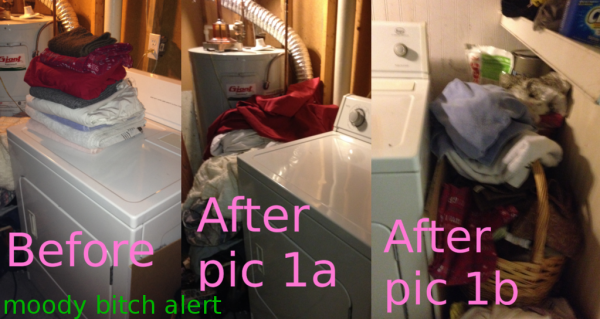 I couldn’t help but be entertained by this women’s actions. To me, it’s baffling and I can’t help but find humor in how terribly worked up she gets and lives her life in such a state of bitterness.

Oh, and FYI, I am gone from the house for hours daily, except for the odd time. She always had more than enough time to do her laundry when I wasn’t home if she really felt like she didn’t want to have to knock.

Anyhow, this has been just brutal to deal with and I found myself contemplating this and people like her one day while sitting at the park on a nice day and I got my phone out and made a digital note about it to her and people like her; adult bullies.

Reflections from the Park – My Open letter to Adult Bullies

When you live in a state of irritation and seem to go out of your way to inflict the same on those around you, I only have one question, why?

What could you possibly like about it or be gaining from it other than being a misery yourself and a misery to be around.

Ok, maybe I have a few more questions or rather, things for you to consider.

Does it please you to be nasty and wouldn’t it e much better to know you treat people with respect and feel good about that?

Perhaps you cannot feel good about that, maybe you are selfish and don’t understand why being nicer could be beneficial to your life and state of mind?

Do you think maybe you are afraid of not being liked and therefore, make sure of it before the possibility of it happening on its own?

Maybe you feel superior  to others and don’t feel they deserve your respect? In that case, what is it that makes you believe you are better than anyone else? You are after all, the one treating people badly.

Quite possibly it could be the start of a new, nicer way of life.