This is about a woman named Samantha Brick who has written about her experiences pertaining to how people treat her based on her appearance.

Ok, before I begin let me make it clear that I am all for confidence. In fact, I love to see women, females in general, feeling good about themselves and showing confidence however; I think this woman needs a friggin’ reality check.

Not everyone’s opinions are based on looks. I know mine aren’t. I base my opinion on someone purely based on how I see them as a person, I couldn’t give less of a shit about how they look.

The more I read of this woman, Samantha Brick, the more I can’t stand her and to be honest she’s nothing special in the looks department. She’s attractive yes but not stunning and wouldn’t stand out in a crowd because of her astounding beauty.

She feels that women don’t like her because of her beauty and claims that she knows this because she’s never been asked to be a bridesmaid.

Well it’s hard to argue with that kind of solid evidence. *screwy face*

There could be a million reasons why people, specifically women, don’t like her but she chooses to believe it’s solely based on her stunning good looks.

People do judge based on looks but there are just as many who don’t. I’ve experienced certain biases myself with people judging me on my choice of clothes or my long blond hair. It happens. It doesn’t however happen so often that directly affects my life that I’d have to write a friggin’ column about it.

And before I’m accused of being jealous myself let me say that I have a healthy confidence in my physical appearance and think I’m just as attractive as this woman, if not more so (yes, I just said that). I don’t think that women everywhere dislike me because of it. There are attractive people everywhere and we see them every single day. Lady, get over yourself.

I believe that if your personality is good enough people won’t care what you look like.

Just my little rant of an opinion. I saw this article and just had to. What are your thoughts? 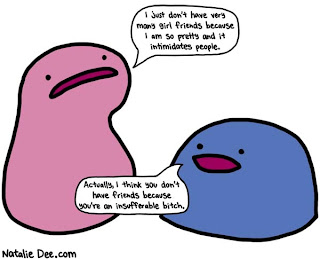