That is the estimated number of modern day slaves. Men, women, and children. Estimated at 80% being forced into sex slavery.

That is the estimated number of money being made/spent on modern day slavery.

I’ve written about this before, I just can’t fathom how human trafficking and modern day slavery exist but the harsh reality is that they do. And they happen everywhere.

I read articles about the Vancouver Olympics and how that was estimated to attract pedophiles and sex traffickers from all over the world because of the size of the event. This happens at all major events.

It is said that a sex slave can be sold 10-16 times a night for $400 per hour with the sex slave seeing none of that money and mostly being young girls between the ages of 12-14.

Sex trafficking is the second largest criminal act next to drug trafficking and tied with illegal arms smuggling. How is this possible? Are people really this shitty?

However, there are many people who are not terrible and from those are people who are raising awareness for this and lending their voice to try and help. 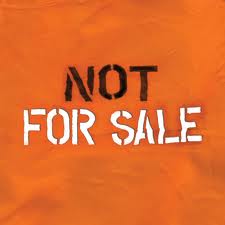 Canada has been identified as a transit and destination country for human smuggling. The extent of human trafficking is difficult to assess due to the clandestine nature of these offences, the reluctance of victims/witnesses to come forward to law enforcement and the difficulty in distinguishing between human trafficking victims and illegal migrants.  Canada is also a country where domestic trafficking for sexual exploitation prevails. RCMP-FAQ’s Trafficking

It’s far too easy for people to believe this doesn’t happen around them. Also that it could never happen to them. I just finished an article about a girl who seemed to have a perfect life. That perfect life fell apart after her parents divorced and her father didn’t support them. She found herself being trafficked all over the country.

Domestic human trafficking victims have mostly been recruited through the Internet or by an acquaintance. The victims were groomed, manipulated, and coerced to enter the sex trade.Some victims of domestic human trafficking have been underage girls exploited through prostitution in exotic dance clubs and/or escort services. Control tactics employed by traffickers to retain victims in exploitative situations include social isolation, forcible confinement, withholding identification documents, imposing strict rules, limitation of movement, as well as threats and violence. Human Trafficking in Canada: A Threat Assessment

On June 1, 2012, the International Labor Organization released its second global estimate of forced labor, which represents what the U.S. Government considers to be covered by the umbrella term “trafficking in persons.” Relying on an improved methodology and greater sources of data, this report estimates that modern slavery around the world claims 20.9 million victims at any time.
The ILO estimates that 55 percent of forced labor victims are women and girls, as are ?98 percent of sex trafficking victims. Trafficking in Persons Report 2012

Right now people are being trafficked. Imagine what that must be like. Human Trafficking and Modern Day Slavery are words you’ll be hearing much more about.