Here is a sample of what I want my profile to say. I understand it isn’t appropriate if I’m trying to attract someone to have that as my online dating profile so I will refrain, for now. hehe.

Warning: Use of profanity.


I’m a single girl, early thirties, no kids, a cat, want a dog and have a passion for kindness and intolerance for stupidity.
I’m a girly girl who likes shoes, pink and fluffy things just as much as I like to fish and kick your ass at table tennis. (Or beer pong but what’s the diff)
I’m sweet as a cinnamon bun but happen to talk like a trucker, fucker lol. Yes, I also thought that was funny and sometimes act like I’m 5.
Why am I single? It could be my Borderline Personality Disorder but I like to think it’s just bad luck. Who the hell isn’t a little emotionally unstable now and then.
I have a great sense of humor, I think baby jokes are funny however, I don’t think talking babies on T.V. are. If your favorite show is a cartoon I don’t think we’re on the same page.
I love to watch certain T.V. shows. I like the kinds that are on at specific times on certain days for a specific time. I don’t rot my brains by sitting in front of a screen at all hours and there’s no way that all of those are your favorites. If this is how you want to spend your days you’re too fucking lazy and I won’t be able to handle you. I like some brains in that head of yours.
I like to listen and learn about people, specifically the ones I’m on dates with however, this seems to lead my date to think that we’re only going to talk about him the whole god dam time. I’d like to be asked some questions too! Are those real does NOT count. 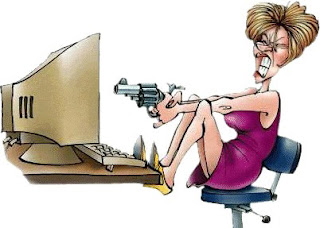 Coming over is not a date. Make a fucking effort; I’m not a mail order bride. Wanting to be courted is not greedy and does not mean I’m a gold digging bitch, it simply means a ‘wanna chill’ isn’t going to cut it. If that’s all I wanted I wouldn’t be torturing myself by being on an online dating site in the hopes that I just might find a really decent man that fits me like a glove.
I know from previous profiles that by now you aren’t even reading anymore so I can pretty much say whatever I want.
Do you realize that there is a scale in which one uses to determine if someone is a suitable match for them? In terms of physical appearance, I mean. For example, if you think you are an 8, you aren’t going to date a 2 and vice versa. Let’s be realistic, you know where you are on that scale based on your life experiences and relationships so don’t play stupid. This isn’t me being shallow; it’s the entire human species being shallow. I have no interest in dating 2’s so as nice as you may be, your rotten 5 teeth and 72 year old body aren’t even on my radar so let’s not waste each other’s time. Seriously. God! I get so annoyed just thinking about this. There’s nothing wrong with going after what you want but C’MON!!
Oh, and if I’m closer to your son or daughters age than yours, WHAT THE FUCK ARE YOU DOING MESSAGING ME?
I’d usually write how I probably won’t answer you if you only send me a ‘hey’ or ‘what’s up’ but like I said, you aren’t even reading this. It’s fucking mental how many ‘hey’s’ or ‘what’s up’s’ I’ve received in my inbox. I just wanna yell at you, get the fuck off the site and go to a stinking chat room, at least there you probably will get a show.
I’m worn out now, going over all of these memories and experiences of this whole online dating thing. Sigh.