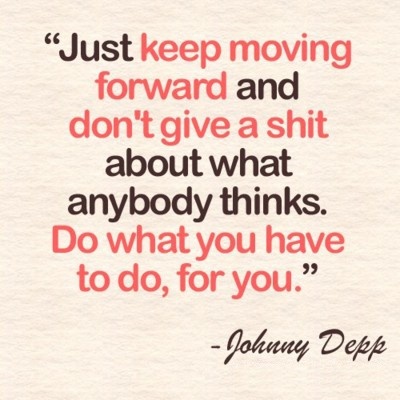 Positive Life Quotes to Live By

I haven’t done a populous amount of personal posts lately where I talk about my life. It’s mainly because I like to promote positivity whereas my life has been a little of the opposite sorts.

2010 really beat me down, I felt something coming on like a bad cold. I knew it was coming and couldn’t avoid it but dreaded it tremendously. During the last few months of the year it hit me, it was more of a flu than a cold. The kind that totally knocks you on your ass and you’re down for the count.

2011 was supposed to be where I picked myself back up. Instead it rolled me over like a dam avalanche. I felt more sadness and fear than I ever have before and could barely pick myself up off the floor let alone put my life back in place.

In rushes in 2012…I start to attempt positive changes although it’s a constant struggle against a negative living environment. I feel no better than I did when I caught the flu but there is a difference of having some hopefulness in my mind.

2013 is here. Where the f#ck did all this time go? Now the pressure is on. I have changes that need to be made yesterday. This is it, world! This year is going to be a good one!

I’m thinking positive more than ever and that’s a great start.

Some positive quotes to live by…

“You yourself, as much as anybody in the entire universe, deserve your love and affection.” –Buddha

“You are never too old to set another goal or dream a new dream.” – C.S Lewis

Please share any positive life quotes you have that are kindred to your heart.