We can all use an excuse for a good wish now and then. I made myself and my friend some wish bracelets.
What I like about them is how delicate and dainty they are. What do you think? 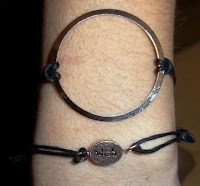 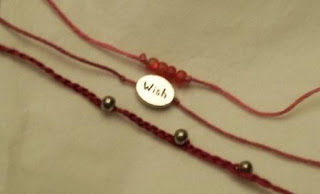 *sigh* Remember last year when I said that 2011 was going to be a good year because 2010 kicked my ass and that I not only felt that I deserved it but needed it and was making an effort for it?ĀReflections of 2010

Well, not only did 2011 suck, it sucked more than 2010. It gave me the ass kicking of my life.Ā
This is where I get personal:
The year began with optimism but quickly turned sour and proved to be not good nor easy.
I fell into the worst episode of depression that I’ve had so far. I’d find myself unable to socialize and there were days where I wouldn’t even shower or get dressed. I found myself plastered to the bathroom floor on different occasions talking myself out of the feeling of wanting to die. I told myself over and over, “You don’t really want to die, it’s only your brain making you think that. It’s logical, believe it”Ā
That was the scariest part of my life to date. I had never ever before felt like I had lost control of myself or my feelings. This time, I had lost total control and was terrified. I forced myself to believe that it was my brain playing tricks on me and made it through alone. I didn’t have anyone to count on or talk to so I quickly decided that no matter how embarrassing it felt, I wasn’t going to hide it or pretend anymore. Besides my mother, I really don’t think anyone could understand. I had already isolated myself from the people in my life that I felt didn’t care and continued to do that throughout the year.Ā
I don’t regret releasing myself from certain friendships looking back. I believe that if I was important enough in their lives it could have ended differently but because I wasn’t I realized that I didn’t need to hold onto those kinds of friendships. Now the friends that I have I know really do care because they did when I was at my worst. The number of friends may have went down but the quality of the ones I have is the best.Ā
Throughout the year the horrible feelings and sadness continued and even began to show physically, I was losing my fingernails, but I began to try and help myself. I decided that I didn’t want to live feeling like I wanted to escape myself and that I was going to try my absolute best to change that. I learned to stop caring what other peoples opinions and judgements were of me and my life. It’s still hard but I continue to remind myself that I only need to make myself happy, not everyone else.Ā
Now it’s the end of the year and although I’m still not in ideal circumstances my attitude and perception has changed and I refuse to give in to live a way that anyone wants but me. I haven’t had to give myself ‘the talk’ in some time but I still have a hard time wanting to socialize and sometimes even getting out of bed. The thing is though, now it’s me I’m working on making happy and not everyone else. That’s a big step for me but one in the right direction.Ā
So, here’s my call to 2012.Ā
2012, I know you’ll give me some hard times but I won’t let you ruin me. Whatever you throw at me, I’ll turn out OK. I’m stronger and smarter than I was last year which already gives me a head start. So whatever you decide you have in store is great and I’ll adjust to it accordingly.
P.S. This year is going to be happier whether you like it or not.Ā
On another note, this is quite a personal post which I try to refrain from usually mostly because there were many hard times and I don’t want this to be about those. However, I feel that it’s OK to share this as re-cap of my year just past not only to simply share the information but so that you can relish with me in the better times ahead.
­¤Öé