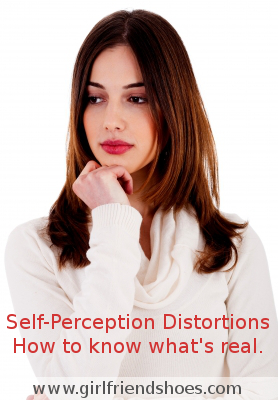 When we’re feeling low and questioning ourselves and thinking negative things about ourselves we are told these are distortions.

What about when we are thinking good, positive, nice things about ourselves. How do we know these aren’t also distortions? What makes these things true just because they aren’t negative?

How are we supposed to know what really is or isn’t. How realistic is our view of ourselves?

Why are we questioning this in the first place? Because that’s what we do when we have self-perception issues.

My take on this comes from what someone told me once about hallucinations while on LSD. If you can’t actually touch it, it’s not really there.

So, while our thoughts are just that we, ourselves actually know what we feel or not and we know how we define being good or bad based on what we feel.

To figure out if we are actual examples of these positive or negative things we are thinking about, I suppose we need to try and touch them. A possible way of doing this would be to make a list and record what feelings we have towards the things on our list.

In the end we would have a physical piece of evidence that we had constructed ourselves based on what only we truly know. Nobody knows another s true feelings unequivocally, this comes from inside ourselves, from our own minds.

If doing an exercise like this sounds odd to you; consider that an asset. The fact that you don’t have these thoughts and maybe don’t understand it is a favorable part of your life. Cherish it because so many people struggle daily with self-perception and distortions. Perhaps imagine for a minute how draining and confusing questioning yourself like this could be.